All photographs and descriptions are (C) by their respective owners.
All rights reserved worldwide. No copying, use, or distribution without written permission.
All photos used by permission.
Page layout, design, and related web content (C) 2011 by Daniel Wolf. Click on photo thumbnails for enlarged views.

Quantitative analysis of die axis distributions is subject to two caveats that dont affect some other kinds of numismatic physical data. Die axes are estimated from quick observations and not usually measured by calibrated instruments as we would use to measure coin weights or diameters. In that respect these data are estimates and we should not expect precision. Likewise the scales of measurement vary. Most observers use a clock face scale to measure the approximate die axis to 12h (0 degrees), 1h (30 degrees), 2h (60 degrees), and so on. Others use an eight-point compass rose corresponding to navigational directions of 0 degrees (north), 45 degrees (northeast), 90 degrees (east), and so on. The scales correspond but do not match exactly. Axis estimates on the clock scale of 1h and 2h might both be reported as 45 degrees by observers using the compass rose scale, whereas an estimate of 3h on the clock face scale is unequivocally 90 degrees on the compass rose and the two estimates agree.

In our samples of Sv 610 and West Greek style Galatian shield bronzes with reported die axes we had only two (of 128) coins, both West Greek types in Copenhagen, that were reported on the compass rose scale in a fashion that could be equivocal with respect to the usual clock face scale (see Table 4 ). We disregard their impact on our quantitative conclusions comparing Sv 610 and West Greek type axis distributions. And we accept the inherent imprecision of die axis reports based on undocumented methods rather than calibrated instruments.

The die axis distributions that help distinguish Sv 610 from the West Greek types are presented in Table 4. Circular distributions of data are amenable to statistical analyses that aid comparisons of the different groups we examined. The data we obtained for die axis distributions of the Sv 610 and West Greek groups were so qualitatively different as to be obvious to the most casual observer. The Sv 610 coins clearly originate from a production technology using fixed dies, while the West Greek coins clearly do not. Circular plots help visualize these two distributions and they are presented here in the following circular distribution graphs for Sv 610 and West Greek types. The plots were created with the aid of an online automated graphing tool, Circplot. The radius of each plot is scaled to the maximum number of coins that fell into one particular orientation. 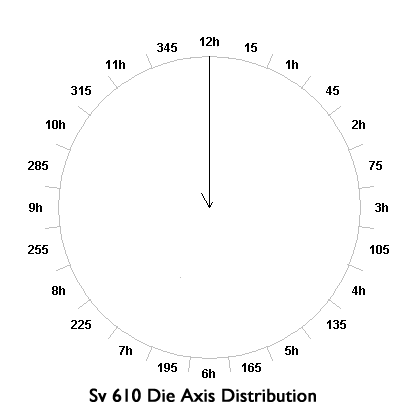 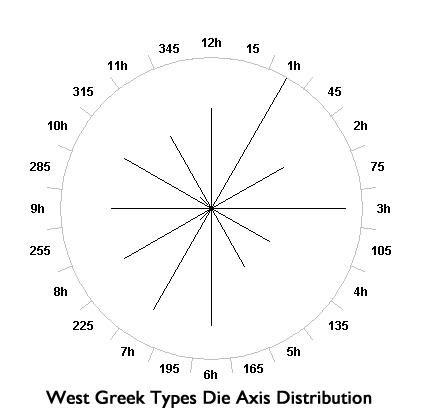 The die axis distributions of Sv 610 and West Greek types are so different as to not merit further quantitative comparison. 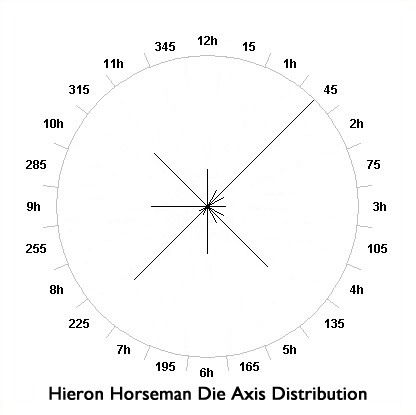